When Project Stitch Sainte Luce (Stitch) first broke ground in 2012, the Project Coordinator, Paula Amour, stayed in Sainte Luce, in a house at the centre of the village. New to the community, she did not know anyone or have anyone to talk to. However, she soon met Madame Mamena who would become her ‘bush mum’ and someone Paula could turn to whenever she had any problems. Their relationship has flourished ever since! Her ‘bush sisters’ will cook lunch or dinner for Paula while she works, and now take care of Caëlla, Paula’s one-year-old daughter, as well.

Paula’s bush family is just one example of community she has fostered around her. She has led Stitch to thrive into an independent embroidery Cooperative, and is now working as Project Coordinator for Project Mahampy, bringing together 166 women into a Weavers’ Cooperative. This last week, I’ve been fortunate to stay with Paula and watch her work come to life, whilst she has been facilitating technical weaving trainings for weavers across the five sub-Cooperatives. In between trainings, I had the opportunity to talk with Paula about the highlights of working with Stitch and Project Mahampy in Sainte Luce. As we started to talk, Madame Esterline, President of Stitch, happened to stop by, and became part of our discussion as well!

Maggie: What has been your favourite part of working with, or being a member of, women’s cooperatives?

Paula: My favourite part has been a lot of different things. I like that the women are sharing knowledge with each other, and with me too, and are meeting and working together. Helping them build and share knowledge is my favourite part of working with cooperatives, especially women. I feel like I am able to help.

Esterline: The evolution of [Stitch] has been really good. There are so many women now working together and earning good money for their families.

M: What affect do you think being in a cooperative has had on the women?

P: Being in a cooperative benefits women because they get more opportunity, to both be together and sell their items as well. The women love coming to the [Stitch] studio and spending time together. I remember that one woman in Stitch told me that she likes to come to the studio to gossip with the other women and work together.

E: Also, we give advice to one another about all sorts of things, even about things at home. If a woman comes to the studio asking for help, we give her advice.

M: How has Stitch affected the community?

P: Seeing how successful the cooperative is has made the community love to be a part of a cooperative. They want to have another one for Project Mahampy now because they see how good it has been and how it has brought people a better life. 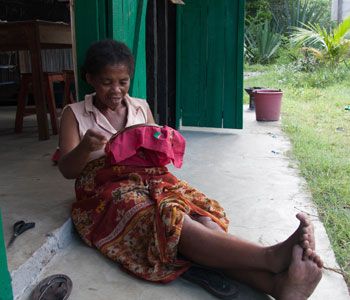 E: We don’t know about the future impact that Stitch will have, but right now everyone in the community wants to be a part of it because they see how well it is running.

M: (For Madame Esterline) What has been your favourite part of being President of Stitch?

E: The thing I like the most is bringing the women together to work well in a cooperative.

M: (For Paula) What are your hopes for the future of the Weavers’ Cooperative (Project Mahampy)?

P: I really hope that the new [Cooperative] runs well in the future. I hope they have a lot of guests buying their products and that the women work well together in an independent Cooperative. I really want each household to have an increased income, and this will help the community.

After Paula met her bush family and Stitch was gaining traction, she built a house in Ambandrika near to where she originally stayed. Today, her bush mum continues to care of her, her house, and Caëlla, who now has plenty of local children wanting to play with her. Sometimes Caëlla joins us for work with the Weavers’ Cooperative, at interviews or trainings, and other times she is dropped off with Paula’s bush family for the day. On her big plot of land, where people are always coming and going, Paula would like to build bungalows where people can stay, as well as a restaurant right across from it. It’s safe to say that Paula sees herself in Sainte Luce well into the future, alongside her bush family and the women’s Cooperatives she has helped bring to life! 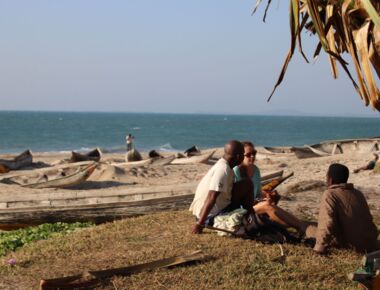 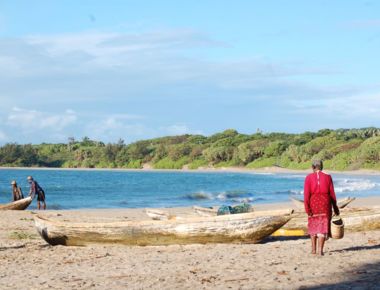